Sometimes a band can sneak around all my internet music finding excursions, and actually come to me through a friendly real life recommendation. A friend of a friend burnt a CD for his mate, then in another country altogether that friend asks me; do you know The Devil Makes Three. I didn’t, I should have, but I do now and all is well.

Later driving along in my (very loud) car the line; “Everybody who’s anybody ( in my opinion), at one time,  lived in somebody’s hallway” made my good friend, who was hearing the album for the first time,  turn to me with a questioning smile and ask “Did he just say what I think he said?”. A small nod was all that was needed to confirm this band were almost singing about us. 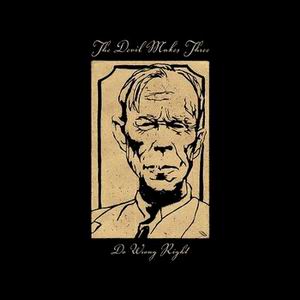 This music can only be called bluegrass, but not some old-timey string band bluegrass, some entirely different animal altogether. My wife always tells me to stop it when I try class music as one genre or another, so I have been working on keeping my classifications simple and keeping the so called sub-genres locked away with all the other nutters that sort their mp3 collections in 30+ different folders (I have been down that road, never again!). So bluegrass it is.

Do Wrong Right has some nice songs, including a classic version of one of my old favourites, Blind Willie McTell’s “Statesboro Blues”. You can get hold of CDs and stuff here http://www.thedevilmakesthree.com/